One of the things I am enjoying with the school year routine starting back up is the return of the veggie gardening group I am in. We meet once a week at someones house and after the essentials of morning tea and conversation (highly important!), we get to work in the host's garden. Edible garden that is.

I was also happy to have my turn to host early in the term, while the weather is still warm and I had a project niggling at me to get started!

But not before The Essentials though...remember? 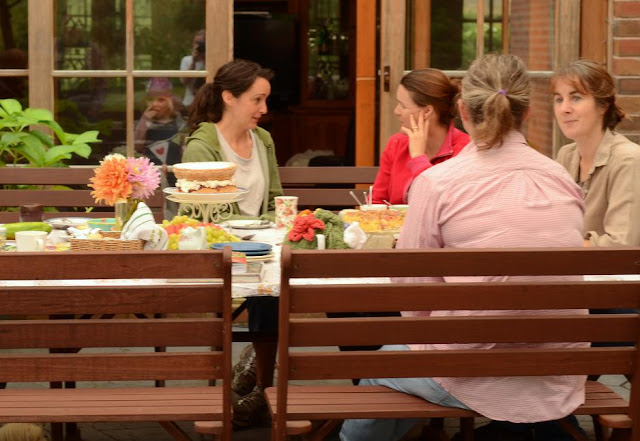 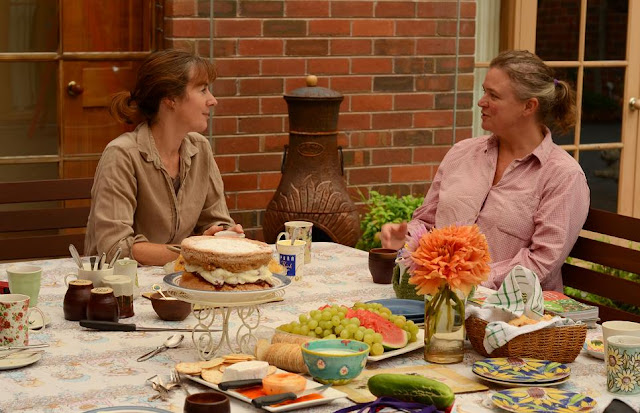 Even the pooch had a play date! What fun they had! 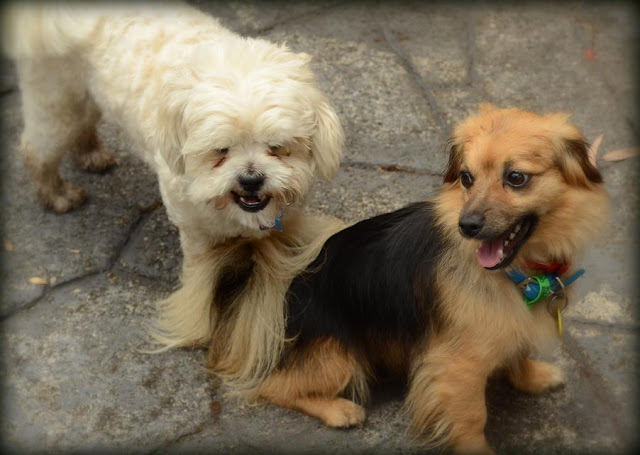 The work started with a shovelside 'conference' as it so usually does. "Which is the best way to tackle the project?", "What needs to be put where?" and my favourite.."Just where is the best site for it?" 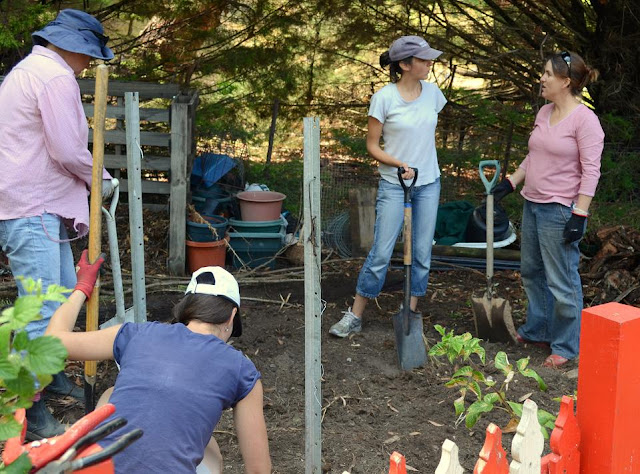 A plan was formed and soon the hard work commenced. I had been excited to read of Hugelkultur in the comments section of a recent post and was just bursting to give it a try. Especially given all the fallen timber we have on our property! It seemed like a perfect solution to use some of it up.

For those of you like me, a little fresh and green to this style of gardening, Hugelkultur is basically a way of creating garden beds by burying big piles of rotten timber. They are then mounded up with soil and planted out. This permaculture technique apparently creates a beneficial place for seedlings to thrive due to the raised soil temperatures as the wood decomposes, and the increased nutrient levels as the worms and good critters move in, turning the rotting wood into wonderfully rich humus. As the timber decays, it acts like a giant sponge, holding water within the bed, thereby reducing our watering time and usage significantly which is an absolute bonus!

Just exactly why wouldn't I give it a try?

Termites. Oh yes. Those worrying little guys. Yes, that is the one potential drawback I have discovered on my researchings. The consensus however, seems to be to ensure your beds are at least 3m/10' away from the house and not to use timber more than about 10-12cm. Ok, I admit it, mine were verging on this, and some quite over, but as the beds were a good distance away from the house I was willing to persevere. After all we had just pulled up the majority of the rotting timber for this project from the very edge of our verandah....two sets of very sad looking railway sleeper steps that anyone walking in high heels on would be asking for trouble! The beds they were being used in were well distanced from where the sleepers had previously....slept, so I felt quite comfortable relocating them.

Ok, then, onto business!

The soil was first dug out of the existing bed I wanted to improve and the timber was positioned. Anything from the rotting railway sleepers and scrap pallets to twiggy branches and some dead but not yet rotting timber was used. 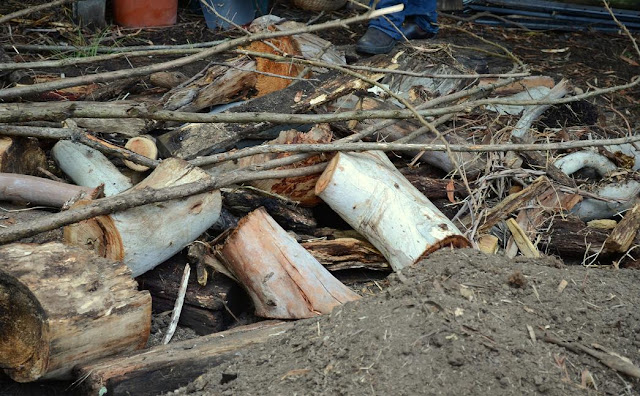 This was then piled over with paperbark that falls so readily from our gum trees along with a couple of barrows of their leaves.. 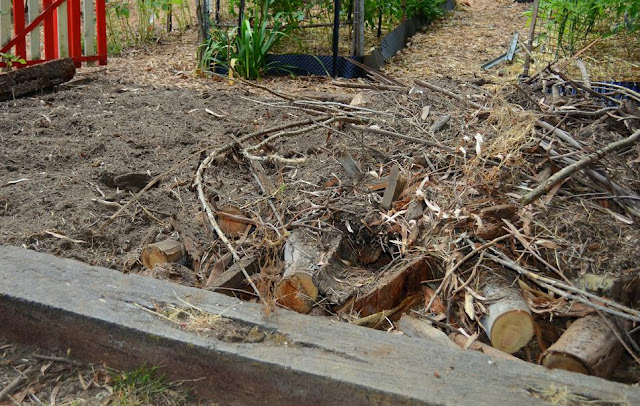 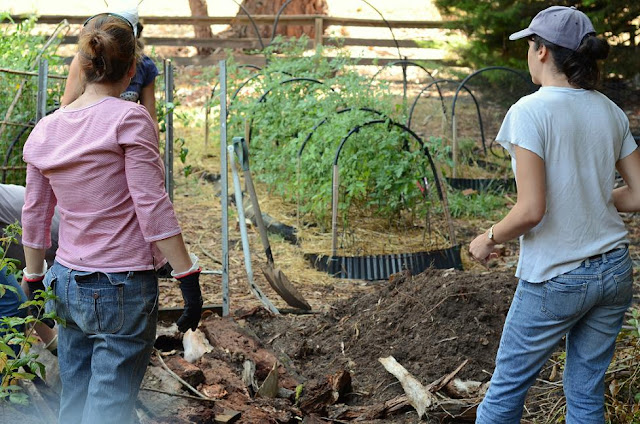 After adding the original topsoil back over the timber pile, the chook pen was cleaned out and the chooky straw was layered onto the soil. The following layer consisted of a combination of some broken down compost and some still in the process of breaking down. Finally, the whole lot was finished off with a good layer of organic mushroom compost mixed with organic mulch which I purchased in. 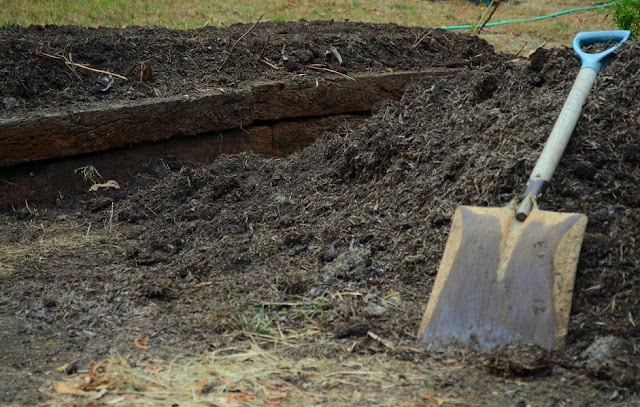 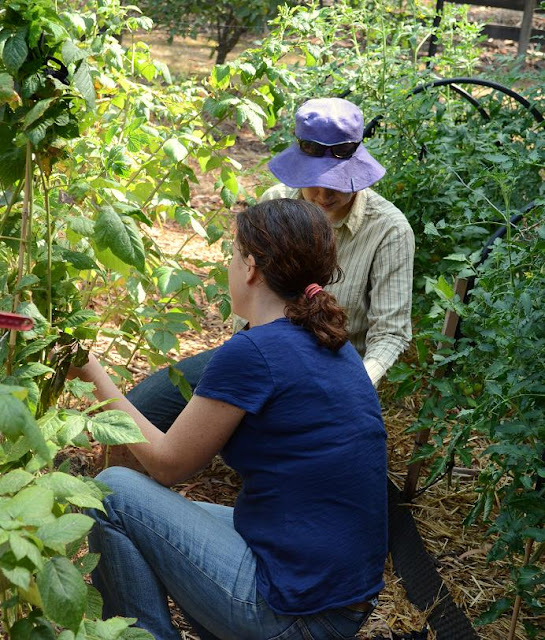 {Elsewhere in the veggie patch, other jobs weren't forgotten about - raspberries get a good tie back in preparation for next seasons growth!}

As it was discussed in the Shovelside Conference that the bed I had planned to improve was in a less than desirable position (shade for half of the day), it was with a good deal of enthusiasm that we formed another hugulkultur bed a little further out, closer to the driveway and in a sunny position for most of the day! 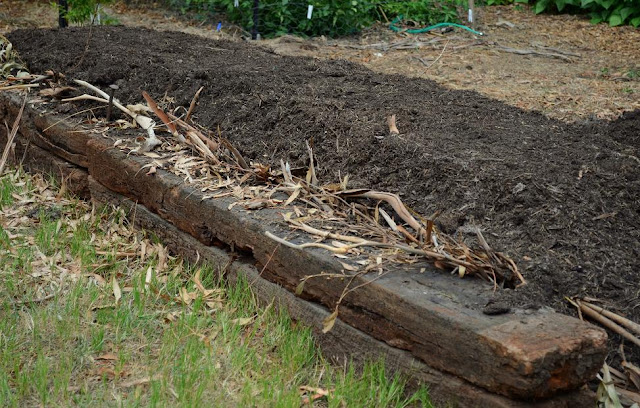 More heavy lifting for the ladies but they held themselves so well. Stacking sleepers inside the bed, more stringy bark, chook straw and mushroom compost. And then, voila...a whole new second bed!

A little edging needs to be finished off on the first bed but it is pretty much ready to start planting in, after the return of its soaky hose that is my garden's new best friend... 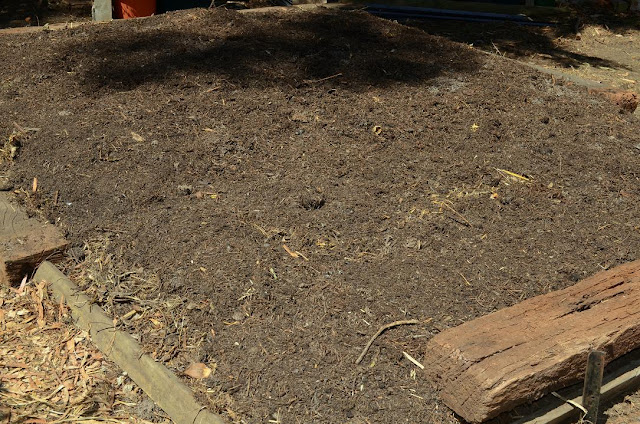 The second bed out the front..in it's gloriously sunny aspect, whoop! 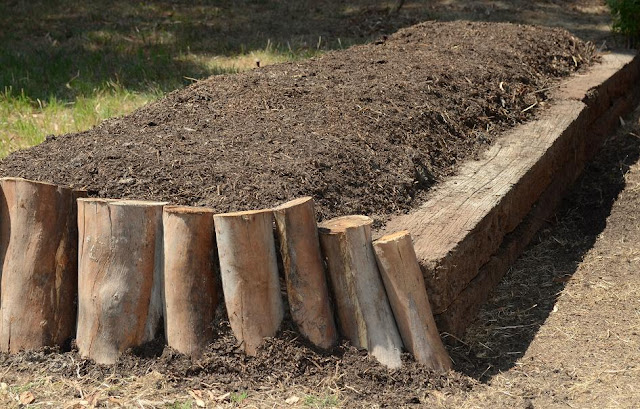 I think I will try the half sun/half shade bed with some cooler weather crops such as beetroot, celery, coriander, rocket, lettuce and so on, while saving the sunnier bed for the winter brassicas. I'm excited!


Have you heard of Hugelkultur? Have you tried this method of gardening?
Success or failures? I would love to hear!

(please link back in the comments section if you have posted on this subject,
so we can share in your experience!)

Links:
THE golden page of Hugelkultur (by Paul Wheaton)
The Art and Science Behind Making a Hugelkultur Bed (Permaculture Research Inst. of Australia)