It's been a bit of a while since I've posted some garden pics...it has really gone crazy in the last few weeks! 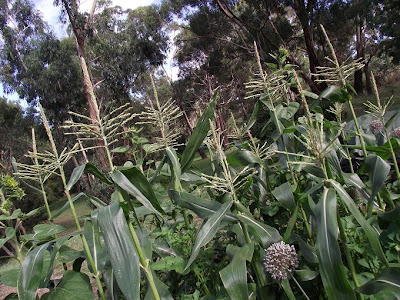 Our corn is cobbing up and we wait patiently for them to ripen. This bed also has some volunteer tomatoes and potatoes growing, along with nasturtiums and sunflowers (from the poultry grain). 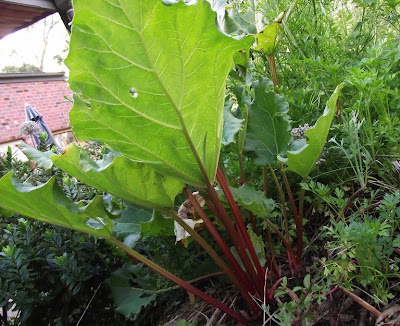 Rhubarb is slowly getting bigger and stronger. This was a cutting from a friend's garden and apparently it only grows red stalks! It's pretty tasty, I have even found a rhubarb eating buddy in the youngest..she loves it! 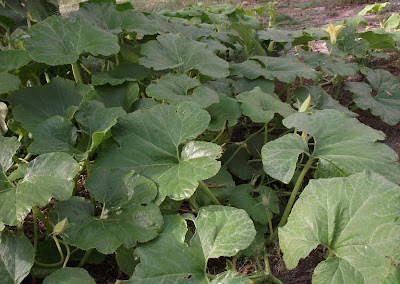 Pumpkins are starting to form small fruit. The one above is actually a volunteer that popped up from the compost - no idea what variety it is...
﻿﻿
﻿﻿ This little guy is a Queensland Blue pumpkin, which I have planted a couple of out the front in mounds to capture the majority of the sun.

The beans I direct sowed in the fenced off vegie garden have really surprised me! It must've been the weather..we've never had luscious growing beans like this before..especially considering that they're growing right under some water hogging cyprus trees! 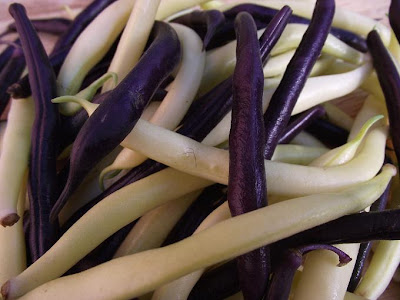 Dwarf butter bean, a dwarf purple variety and I could've sworn I planted some Blue Lakes, but I guess they're a little late coming to the party...

Yellow Zucchinis are all systems go. We have been picking them for a couple of weeks now.

With my previous (and completely unexpected!) success with potatoes this year, I've decided to plant another bed in the hope of harvesting some in the colder months. This lot are in the greenhouse..not sure how well they'll cope once we have some frosts but a persons gotta try, right?

And finnnallly, we have tomatoes-a-ripening! Again, mostly volunteers, which I'm not complaining about - they seem to be hardier and more vigorous than the pampered seedlings I always try to get going. These ones are Tigerellas - so abundant and a nice size too - not too big and not too small..good in a salad and also big enough to slice for sandwiches. Red fig tomatoes are also ripening, which look like a little bell, and slowly slowly the Romas are coming along..