A kitchen experiment: homemade cream cheese in a baked cheesecake

A few days ago, I decided to put some homemade cream cheese through the ultimate test - baking! I still had my doubts, not thinking that it would perform as well as the solid brick available at supermarkets. I'm not sure why I thought this, but I needed to try it out to see for myself...

Firstly, I made up a batch of yoghurt with 2 litres of UHT milk warmed slightly in a casserole dish in the microwave until just lukewarm. This was good, because it also warmed the dish as well. After adding the yoghurt starter to the milk, I wrapped the whole pot in a large towel and placed it near the fireplace overnight. The next morning, the yoghurt was drained, at first hanging from a prop on the bench and then later, in a cloth lined sieve set over a bowl in the fridge. It had a total draining time of 24 hours, by which time I had a fairly solid lump of cheese.

When it comes to cheesecakes, I don't make them very often.... mainly because I would be the one who would end up eating most of it and do I really need all of those extra kilos? Hmm, not at all! However, I do think they are a good recipe to have up your sleeve, especially for family/friend gatherings when you can cut yourself a small sliver and share the rest around, watching the whole cake get eaten up and not be wasted. So, it was back to the books. Being after a baked cheesecake recipe, not a refridgerated type, I discovered most recipes are all pretty much the same..the ratio of cream cheese to eggs are very similar and then additions like sugar and flavourings are added.

I decided to keep it simple for my first attempt at this "homemade cream cheese cheesecake". The following ingredients were what I ended up using...

I placed the cream cheese in the small bowl of my electric mixer and switched it on to a med..med/high setting, and beat the cheese until it was smooth. The cream was added, along with the caster sugar and beaten well. The eggs which had been lightly beaten, were added slowly and finally the vanilla extract. The mixture was then poured into a 'cookie crumbed and buttered' springform tin (8 1/2 inch), and baked at 150c for about 1 hour and 20 minutes (can't be sure how long exactly as I was in and out of the kitchen). The cake set firmly around the edges first, then puffed up a little towards the end of baking time, similar to a quiche, until finally the center had set. It developed a few cracks around the edges on the top due to the 'puff effect', but these dropped back down again after the cake had cooled, which took about 2 hours at room temp (ideally in the oven with the door ajar), and then several hours in the fridge. Perhaps I'll reduce the oven temperature slightly next time, to try and avoid the cracks. 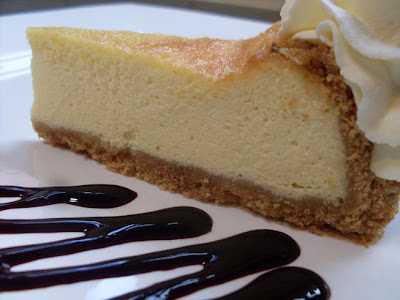 I was quite pleased with the cheese part of the cake, but not so much with my base....next time I think I'll make a pastry base to avoid the crumbiness that I encountered.

We had some leftover blackberries from summer pickings and these were made into a simple coulis to go with the cake:

450g of frozen blackberries were washed, drained and placed into a pot over med-low heat and left to heat until the seeds and flesh had seperated and the juices were running freely. They were then passed through a food mill on the finest disc and then sieved through a nylon sieve before being returned to the pot. About 4tbs of sugar were added to the puree, and it was simmered over low heat for about 10 minutes, until the mixture had reduced and thickened and was just starting to catch on the bottom of the pot. Then it was into a squeezy bottle and into the fridge.

So, how was it, you ask? Well...as I said, I was really happy with the cheesey part, but next time would add some lemon zest or juice to zing it up, as it was a little on the bland side. Texture wise it was lovely and smooth, and not heavy at all...I was actually amazed that it set..which was what my main curiosity was. 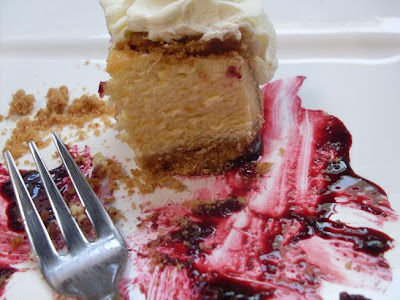 The blackberry coulis was a good addition, very berrylicious.
I'll definitely use the made from scratch cream cheese again in baking. It's great to know that the homemade version performs just as well, if not better than the shop bought variety.
at July 19, 2010