The mushroom season feels like it's coming to an end. The weather has a sharp coldness to it, and what fungi does pop up from the earth seems to get damaged by rain (and bugs), fairly quickly. With a new thrifted mushrooming basket in my possesion calling out to be used, I bundled myself up in warm clothes and went out for one more forage. 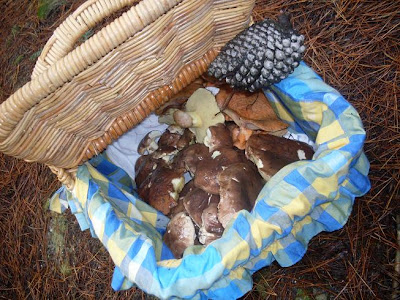 The basket did the job nicely, and was pulling my arms down with it's weight by the end of my walk. 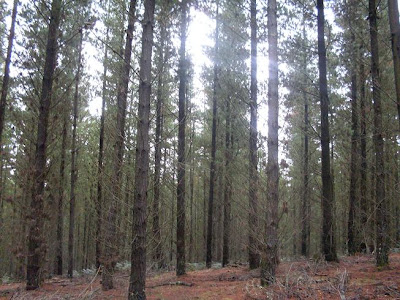 The pine forest is a welcome sight for the mushroom seeking person. I was after Slippery Jacks on this occasion, not having given them a proper go before and wanting to try them before the season came to an end. 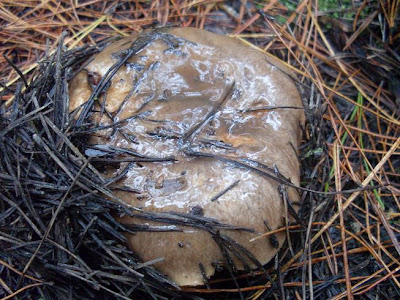 And wouldn't you know it, I happened to find a few! 'Slippery' because of their (so unappealing!) slimy coating on the top of their caps. Don't worry, my little knife was a'scraping! This coating isn't poisonous, but it's best removed as some people can be allergic to it, suffering gasto upsets when consumed. Besides, would you really want to eat that? 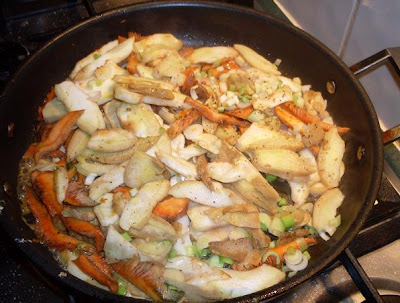 After bringing them home and cleaning them up I had about 1.4kg of mixed sliced Slippery Jacks and Saffron Milk Caps (the orange ones in the pan). The Slippery Jacks are a surprisingly clean and white mushroom under all that 'ooze'. They were sautéed in batches with generous amounts of leek, garlic, olive oil/butter, and plenty of salt and pepper. The last batch also had a big handful of fresh thyme and parsley from the garden thrown in. They were then whizzed in the food processor until smoothish..but not completely smooth..small lumps remained..and then into the fridge they went for the night.

The next day, the remainder of our homemade cream cheese was added to the mixture (about 1/2 cup), and mixed well.

Then it was onto the pasta. 800g of plain white flour, 8 eggs and 6tsp salt seemed to be just the right quantities to accommodate our mushrooms. 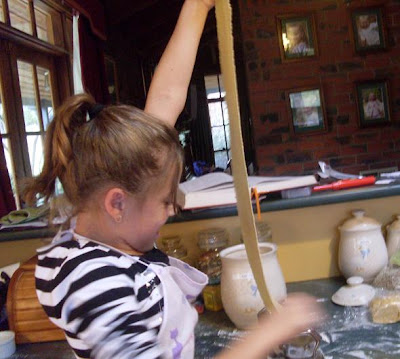 After spying me at work, the 10yo quickly got in on the action and pretty soon so did the other two. It was all happening in our kitchen yesterday, with hands flying, flour scattering and small hands seeming to be everywhere I turned. A state of chaos quickly ensued what was planned as a relaxing morning of pottering!

The dough was passed through to the second thinnest setting (no.2) on the pasta machine, and then the mushroom mixture was placed in small balls along the length of the pasta sheet. 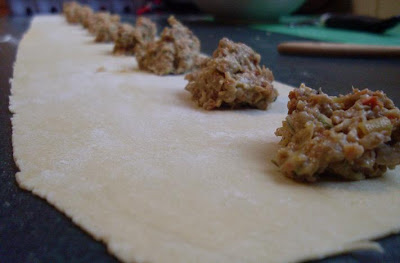 The edges were brushed with water to provide a seal and then the dough was folded over to enclose the mixture. 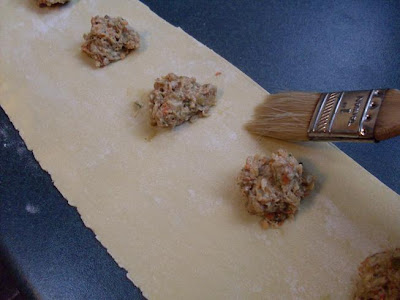 Any air pockets were squeezed out with my 'helping hands' and then the ravioli were cut with a pastry wheel (my youngest kept calling it a 'Tractor Wheel'. Funny!). 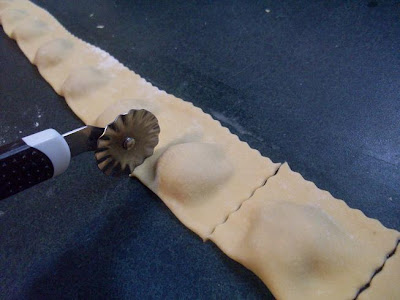 The morning provided us with just over 2kgs of ravioli that was packed and frozen for future yummy, quick dinners. Of course we had to try some for lunch, and it was just wonderful with a simple sauce of sour cream, chives and lots of black pepper. I found the flavour of the Slippery Jacks slightly stronger than the Saffron Milk Caps, although still definitely not overpoweringly 'mushroomy'. 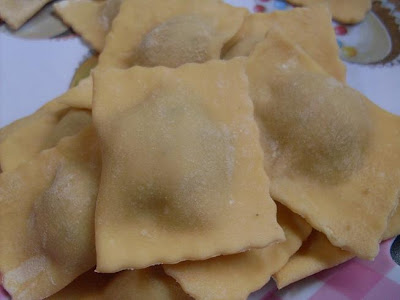 The pasta was very satisfying to make, considering only the flour, butter and oil were bought. The herbs, leeks and garlic were from our garden, the eggs (well, half at least) were from our hens and the mushrooms were just a hop, skip and a jump away in the nearby pine forest.
Low food miles of the best kind, for sure.
at May 30, 2010